Map shows a completed street, but run summary says I haven't run it at all

First, thanks for an awesome motivational tool!

I’ve been running new side streets and today’s 12.75 miles showed nothing completed or progressed. When I look at the map I see my purple line covering the streets but no green nodes. I tried disconnecting / reconnecting my connecting services earlier, doesn’t seem to have made a difference. Any ideas? 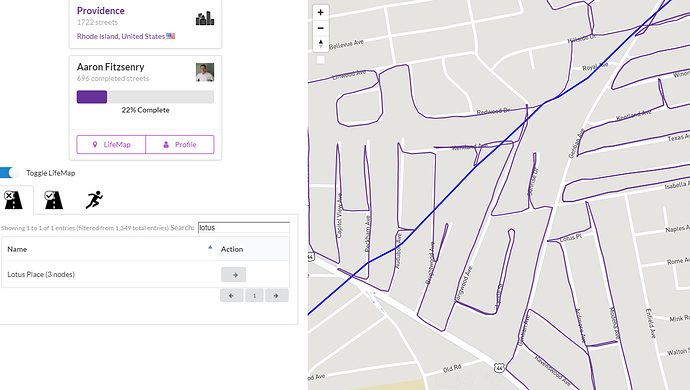 It could be due to the large backlog of background jobs. There were a lot of new signups, so your completed/progressed calculations might just be delayed.
I’ll take a closer look after the jobs complete & write back here when I have more info for you.

Thanks! Looking at it a day later, it looks like the streets are now marked as completed, but not as part of this run. I see a few previous posts that seem to be related and resolved. Again, really appreciate the site, going to go chip in a few bucks. Cheers!

Hey again! Looks like I may have broken something when I disconnected and reconnected my runkeeper / mapmyrun accounts. I waited a few days to see if it would correct itself, but the opposite of the original bug seems to have happened; my city summary says I’ve completed a street (that I know I’ve completed) but it doesn’t appear on the lifemap. I see at least a few others that I know I’ve ticked off on old runs, but here’s an example with Chalkstone:

As before, thanks for your time and this site!