I put this concern in a PM to James at the start of the Alpha test, but I wanted to put it here for the records and possible discussion.

I don’t fault anyone for where they live, but if the “Free for All” style challenge is to become an normal fixture, it puts a higher priority in my mind on figuring out how to handle the double-counting of streets.

Right now, it doesn’t matter too much if someone gets double (or more) credit for a street, but if the sole purpose of a challenge is to compare the numbers on strider completes vs. another strider, it isn’t an accurate comparison if one of them gets a bump from a situation like that

Hi,
When you talk about “double-counting”, do you mean for example that a street is counted twice in an activity? See capture of my most recent activity.
I was just wondering why “rue Renaud” appears twice in the list of completed streets.
It would indeed be more logical and fairer for the street to be counted only once.!
Regards,
Marjorie
2020-02-26_1030|690x336

There is discussion out there about how to handle these already, but it was sort of “meh, not a big deal” until this challenge was introduced.

@jpbari this is definitely happening for me in Calgary which is also in Census Division no. 6. I’ve added this to the tracker for it to be removed, but it doesn’t seem like those move too quickly. This is an issue for a number of people in the February free-for-all - like @3d77eb7f476ad71e3f37 mentioned above and the current leader @tonycmachado (although even with the double up Tony has still done a ton of streets!!).

All that said, I don’t know what the solution is. Any solution I can think of seems like it would be as much work as just deleting the cities. Features like “exclude streets in this selected city” or automatically verifying every street to ensure it only exists once seem really complicated. Even self-declaring the doubled cities only goes so far

hi,
the march challenge has started and i am already 186 streets away!
if you look at my screenshot I only completed 45 streets. 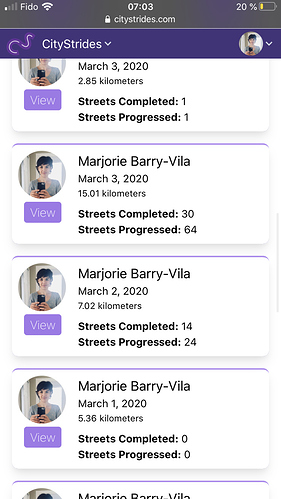 image750×1334 202 KB
Even if I know that the streets are counted twice because of the “two cities” in Quebec City, could the challenge page already take into account only the completed streets?
Marjorie
jpbari (JP Miller) March 4, 2020, 12:22pm #6

I think that is cool part about this challenge is that it opens it up to streets you have completed in the past, so in my small city, where I have been 100% for a couple years now, I can go on a run and add streets for this challenge for March despite a run being all on streets I have completed multiple times.

It took me a few minutes of debugging before I realized what’s happening (and, in turn, what @jpbari was talking about).

Let’s take this activity as an example: https://citystrides.com/activities/8414730

I came up with an idea on a potential fix for this while talking about Challenges with my wife yesterday… I haven’t worked through all the phrasing, or the actual implementation, but the basic idea is:

I can add a boolean (true/false) field on the City records, so that I can mark certain cities as “subset”. I can then ignore those for Challenges that aren’t attached to a specific city.

So, there could still be a Challenge to complete every Street in La Cité-Limoilou within 2020, but the March Mania Challenge would only apply to streets in Québec.

I just realized, in scrolling back up this thread

for two example cities, that @davemorin already suggested this when he wrote:

Features like “exclude streets in this selected city” or automatically verifying every street to ensure it only exists once seem really complicated.

I did not save the admin level on the city record, so I think I just lost out on automating this. There are 5 regions that pull cities in bulk from multiple admin levels, and there are an unknown number of cities that I manually imported as a one-off that were at a different admin level from the rest of the cities in that region. This totals somewhere between

Wait, @JamesChevalier, did you say, “while talking about Challenges with my wife”?

I run. My wife and I go for walks. Lately she figured out why our walks are going to so many different (new) places.

I tried to explain. It was a tough sell.

Sorry for the hijack. Love learning the nuts and bolts of CS.

PS. My wife and I both wrote code for a living at one time. In fact we met because she inherited the code I worked on, when I moved to Taiwan… But that’s another story.