Another supporter, My data is still wack.

Thanks so much for the work you are doing!

Echoing others - have been supporter/subscriber (not sure the diff) for 10 months, still 0 streets compared to 1211 pre update. Not urgent at all - just FYI. Thanks James.

Subscriber since the beginning of this year.
Looks like all my runs before September 12th are all at 0/0 completed / progressed.
Good luck and thank you!

Also a subscriber and missing almost all streets, sorry.

Don’t wanna add to your stress, but also a subscriber here with missing %.

For me it’s not an issue with the %. As long as the maps get updated so i can plan my runs, i can wait for the rest.

So take a step back, don’t stress and save the precious server time for when you have the code perfected.

Hi James. I also mis my progress. The lifemap looks ok but I see only 2 activities with some progress, out of 100 pages.

Thanks for looking into this again.

Supporter here still missing the full update. I see new nodes on previously completed streets, so something looks updated, but most cities and previous streets are still missing.

Hi James. Thanks for the hard work. Subscriber here still with missing streets.

Great site and thanks for everything.

CityStrides has certainly helped with running every street in Atlanta.

Hi James. A lot has improved in the last 48 hours but my profile still is not completely updated. When checking the main city I run in I see many streets that I completed 100% but they are not counted in my %completion. Hereby one example but I can send you more if you need it: 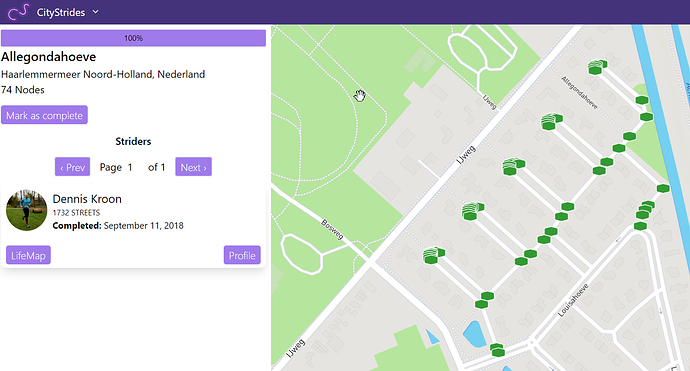 Hi James, I am a supporter, but no updates yet. This is fine as long as I know you are working on it. Good luck

Haha! That seems like as good of an explanation as any!

Thanks for all of your work on this. I am a new supporter and it looks like my data is still out of whack as well.

Hey there, existing supporter where new streets are getting marked as completed, but old ones are showed as incomplete. I think I was at 70% for this city and it dropped to 7%

Here’s a screenshot if that helps: 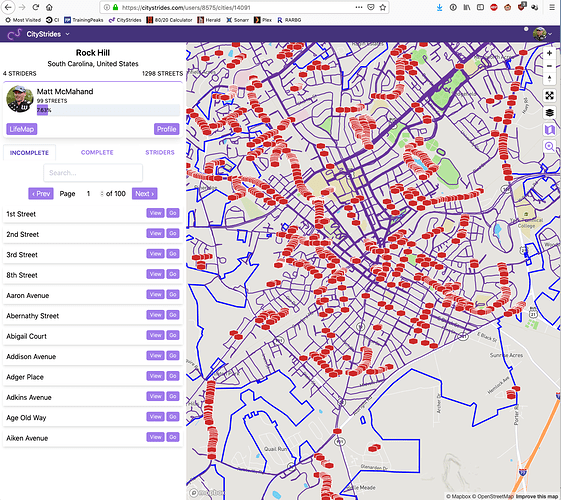 Also, after my run this morning I noticed that it showed a bunch of streets for that run as having made progress but when I looked at my lifemap I had already completed those streets.

I’m still having some issues of not all completed street registering towards my percent of the city run. I’m in no rush, and thank you James for taking on this whole endeavor!

@JamesChevalier can we get an update on this issue? Thank you for all your hard work

Long-time supporter here having the same issue. It’s not just me. It appears that only two of the higher-mileage Vancouver BC Striders have had their completed street totals restored.