I enter Settings, click on Default City but the list is empty. If I click on LifeMaps it defaults to New York which is approx 4000 kms away from my location.

Have you completed a street in any city?
If you view your profile page, do you have a list of incomplete cities in the left column?

No I have not completed a street yet and no list of incomplete cities. New user.

Ah, ok, that’s it then - your list of cities (which is what populates the selection of default city) comes from having completed at least one street in it.

There was a moment in CityStrides history, where any progressed street would count towards that list. This resulted in a massive list of 0.0% complete cities for a lot of people, which looked odd.

But @JamesChevalier this does not seem to be quite the whole story. As you can see I have several cities with no completed streets in my list, and it seems I can set e.g. Brookline as my default city, even though it has no completed streets. I seem to remember that those cities were removed at some time, but now they are back, at least for me… 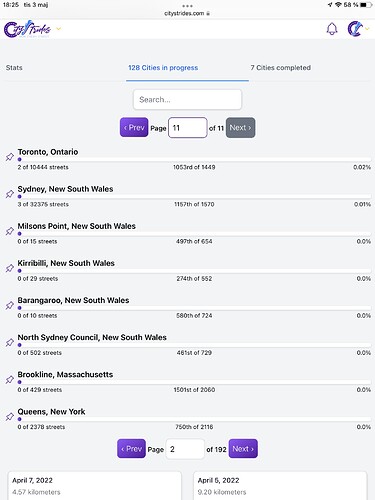 I went hunting through the data… Your Brookline city was created on April 18, 2022 based on your participation in the Boston Marathon (congrats!).
Brookline was updated from OSM on 2022-04-01 … so I think that rules out a city update causing one of your completed streets to be removed from CityStrides.

Ah! I’ve spotted the bug that allows an activity to add a city to your list even if it just progressed streets in it. That’ll be fixed in the next release.