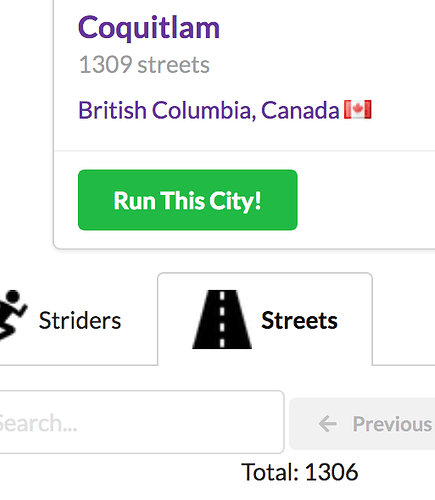 So maybe 1309 was the total before flagging?

Doubling down on this, same thing is happening in Cardiff, UK.

I don’t know why, but cached count got out of sync with the actual count. I’m guessing that it’s related to my Street deletions, but

… I’m running a command now to reset the Street count for all Cities. I’m unsure how long it’ll take to complete this, but I’m hoping it’ll be done within an hour or so.

After I reset all the counts, I’ll go delete some Flagged Streets & see if the counts go off.

Edit: The count reset is done.

There is again a bug in the number of streets in some cities, for example in this Belgian city of Watermael-Boitsfort - Watermaal-Bosvoorde:

The later seems to be correct unless by accident you excluded some streets, the former seems to be the problematic one, maybe because the count includes objects which are not streets, or has not been updated. The difference is usually not big (1-2 streets), but for some, like the example above, it is bigger. Based on the Brussels sample - it looks like the difference is more pronounced for the cities with large nature areas, so maybe hiking trails/paths are the cause for the difference?

This is a very minor issue, as percentages seem to be calculated correctly, unless this is is the result of some streets missing from your data

This is a known bug, related to zero node streets. If the city update code exited early, not all the statistics were updated. It’s being worked on.

Is this still a known issue? Cardiff (Cardiff, Cymru / Wales - CityStrides) got updated today and the number of streets went from 3505 to 3508 (actual ie my incomplete + complete) but it is showing as 3512. I was hoping to get 100% of the city on the weekend but it looks the the the percentage calculation is based of the incorrect 3512.

Is this still a known issue?

My background job server did crash last night, but the timestamp on Cardiff’s last update looks like it finished on the 10th at 1:30pm UTC. So I don’t think that is playing a role here…

I just manually corrected Cardiff’s street count & queued up recalculations for your account. That should help you for the weekend & not make you wait around for another 5-6 weeks.

well, back to debugging!

Isn’t this caused by having multiple streets with the same name when you haven’t run them all yet? My town has 3 First Avenues for example

Isn’t this caused by having multiple streets with the same name when you haven’t run them all yet?

CityStrides considers all three as a single street. OSM doesn’t know what a street is, just nodes and names.

So CS defines a street as a collection of nodes with the same name in the same city. This means that all three First Avenues are the same street.

Couple more that updated recently and have incorrect counts:

Hi,
I notice that I have the same problem with the streets of Charlesbourg, Quebec. I completed the 751 streets but didn’t get 100% due to the difference of 5 streets. I do not know if you wanted to be pointed out to you which cities have this problem?
Thanks
Marjorie

Hi @JamesChevalier do i need to request an update for my city, it was last updated end of Jan or will the update happen in time?

I guess the% will update in the next few hours?

do i need to request an update for my city, it was last updated end of Jan or will the update happen in time?

All active cities (any city with anyone who has ever run there) are continuously being updated, so it’ll just happen on its own. As of this morning, there are 61,083 active cities & the system works through them at a rate of about 50-100 per hour - though I have seen some stats as high as 300/hour. Looking back at the daily stats, it’s anywhere from 1600 - 4500 per day.
Overall it’s looking like cities get updated roughly monthly, with some stretching out to 5-6 weeks.

I guess the% will update in the next few hours?

Yeah, it just took some time to update.