Will this include the townships in Minnesota? I know I put them in the missing cities but you said was not possible. Just living in a rural area I have ran so much that is not counted.

I don’t see anything in the list for Minnesota, so they might have already been added.
There does seem to be an issue with some people not being added to cities ( New city added - not showing my completions - #9 by JamesChevalier ) … Can you check if the cities exist now? Minnesota, United States - CityStrides

No cities in Minnesota that have “township” in its name have been added. I know I asked about it last year and added on a spreadsheet but there was a reason was not added. Its frustrating as I live .3 from Marysville township.

Hrm. Marysville Township isn’t present in OSM at all.

If I do a structured search for townships in Minnesota, I see a bunch - I don’t think you’re looking for those, though.

I found our old thread on this: Townships in rural Minnesota
It doesn’t look like Franklin, Woodland, or Marysville Townships have been added to OSM yet.

Is there a way to point me in the right direction to add them. I did add street names and fix a few streets on OSM. But adding all this freaks me out lol.
I did find a geo name for marysville township. GeoNames.org

Boundaries are unfortunately a bit more complicated than streets. I do some mapping in the northwest Twin Cities though and can help get those added into OSM. There’s not a lot of township boundaries drawn in MN yet, currently it looks like only in Isanti/Chisago County. Though it is documented in the wiki, so don’t see any reason why we shouldn’t add them. 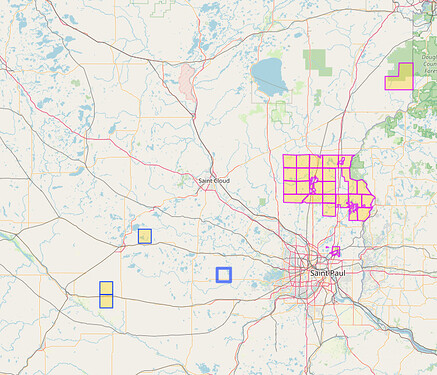 It doesn’t look like any admin_level=7 boundaries in MN are being pulled into CityStrides though, so @JamesChevalier will need to add that if I’m correct. Apparently townships never overlap cities in MN, so shouldn’t cause any nesting (United States admin level - OpenStreetMap Wiki).

Those three townships are now added to OSM.

@zbrown4 your are awesome thanks! Would you be interested in adding a couple more?

How could I go about getting some townships in Ohio added? I’ll try to provide any information you need. Primarily Miami, Washington, and Clearcreek Townships near Dayton.

Yeah sure thing. Always happy to improve to improve the map in MN. Which ones are you looking for?

I’m a little more hesitant to map in areas I’m not familiar with, but the wiki does have a really good page documenting best practices for townships in Ohio (Ohio/Boundaries/Townships - OpenStreetMap Wiki). Looks like there is an effort to map them all but not much progress has been made in the past year. You could contact one of the editors on that page to see if they would be willing to map them or try it yourself using the guidelines.

And one more Fairhaven TWS

Thank you I’ll check it out. Just don’t want to mess up the map for everyone! I think this would amount to drawing a few straight line boundaries then defining the area.

Added some more (Buffalo, Chatham, Rockford, Middleville, Victor). Some of them can be quite time consuming depending on how complex the border is, so I’ll slowly chip away at the list. Hopefully that’s a good start at least.

Worst case scenario your changes can always be reverted, so no harm in trying. It pretty much is that simple. The township itself gets defined as a boundary relation, and you add each of the segments (ways) of the border to that relation. If it shares a border with a city or another existing township, then you add the way to both boundary relations.

Thanks!!
These are making their way into CityStrides now
(update: I just realized that the delay between live OSM data & where I query will cause these not to return data for a little while … I’ll need to try again tomorrow)

Thanks no rush. I have ran in most of the south and east counties. Slowly working my map up. Now I will be interested to see how many streets are in each of these townships. Since I finished 39% of the cities streets in Wright co.

Thank you both for all the hard work!!

2 of the Townships have worked! They popped up last night. I searched the other ones Zach added but they say 0 streets.

OK I have added a boundary, then double checked to make sure all boundaries are there and marked as “relations” (It’s a rather weird shape with some additional little “islands”). It’s admin_level 7 (whatever that means). Do I need to do anything further to get Miami Township into CityStrides? This will be like Christmas morning for me.

Edit: I have also added Washington Township just to the East of Miami Township, it was much simpler.

I can’t find these, can you share their OSM links e.g. Relation: ‪Holyoke‬ (‪1181614‬) | OpenStreetMap