Regarding countries left to import.

I’m heading to Samoa in October, and want to get some runs under the belt while I’m there. I also know others there who might be keen to join the site, but are obviously limited given a lack of Samoa entities.

I’ve taken a look at OSM, and Samoa has it’s main regions covered (admin level 4) - listed here as subareas: Relation: ‪Sāmoa‬ (‪1872673‬) | OpenStreetMap
However, within these areas, there’s not a huge amount of detail (as of yet). It looks like level 16 is the most common for ‘City Admin’ levels - though there’s a tonne missing.

Is there any possibility of an inclusion of Samoa, even at just the Regional level? As it is, there are 11 of these.
Is there anything else I, or anyone else (especially those less familiar with OSM) could do to assist?

Thanks in advance,
Warren.

I only see admin_level 4 places under Sāmoa: overpass turbo
So I’ll have to either import 4 as regions, and then within each region list only itself … or (this is unlikely to be my approach, based on what I’m seeing in Wikipedia) list Sāmoa as the only region in Sāmoa, and then import 4 as cities.

Yes, very odd indeed that there are only level 4 places. When viewing Samoa on OSM, it suggests it is not a parent of anything… but if you view the Relation link I supplied, it shows relations to subareas, and if you view any of those regions, THEY have level 16 places within them.

Anyway, all very odd… but I think for the level of use that this will garner (for the time being), your amazing work (as always) to simply import Samoa and have the admin level 4 (regional areas) as a starting point should suffice (and will likely be more than enough for my personal needs during my trip!).

Interestingly, viewing the Tuamasaga region (which includes Samoa’s capital Apia), there are 39 streets, which if I set all to Show: 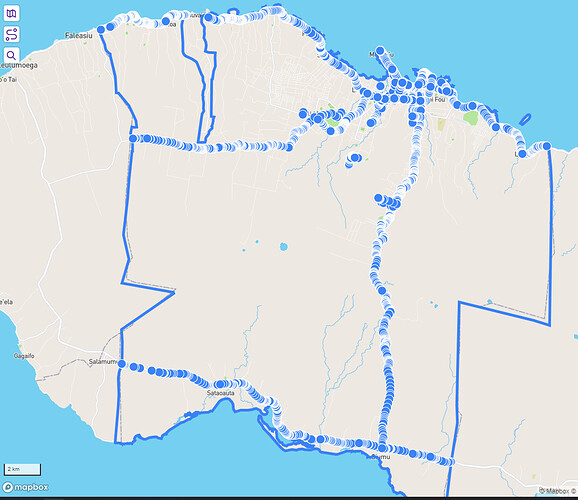 Yet if I display the Node Hunter for the same region: 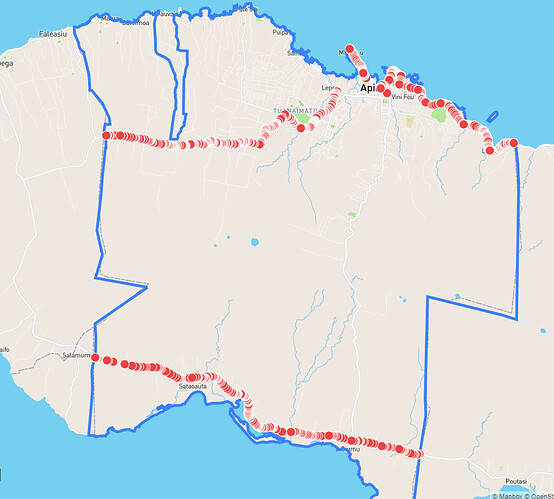 There are quite some differences to areas mostly around the border, but notably Cross Island Road appears to be showing up quite differently.

Anyway - there’s also a heap of streets missing. I have to assume this is purely a data issue in that OSM itself is likely missing most of this data, and so there’s nothing you can do about it until OSM is better detailed.

Thank you again for what you’ve done - much appreciated! I’ll be knocking out a few streets while there, but having a list of what CityStrides/OSM knows about will give me something more specific to target

Yet if I display the Node Hunter for the same region:

There is a 1000 node limit when using node hunter, remember the red warning

Ah, yep… been awhile since I’ve seen it… (I must have clicked a “don’t warn me again” message) and I was assuming that the issue was to do with the other missing streets. You’re right of course, when I zoom in a bit, they are shown as expected.

Still a lot of streets missing, but again, that’s an OSM issue, from what I gather.

Still a lot of streets missing, but again, that’s an OSM issue, from what I gather.

Yup, looks like it. When you’re there, you could add quite a few street names to OSM. They won’t count as you run them, but once the update propagates, that will get counted. Emphasis on doing this while you’re there, so you can go around and survey streets you walk or run. Don’t just copy streetnames from Google Maps or similar since that violates licenses.

Adding streetnames to OSM is fairly easy to do. You can have a look at the wiki section of this forum or simply clicking Edit on Openstreetmap, this should drop you in a tutorial for the default editor (id). If you’re still daunted by the task, you could even just keep track of things on paper and ask someone to add them for you afterwards. You can also flag your changes for review, so someone else can have a look at them to ensure you did not break anything.

Another alternative to adding names yourself is to capture imagery for mapillary.com, then the pictures are openly licensed and can be used as basis for OSM editing by others.

I had a look at existing ground level imagery, e.g. this spot, which shows those streets do indeed have a name, it is just a matter of adding the information. Sadly the street name does not look legible there or I would have added it for you.

Edit: Street names might actually be a pretty recent thing [1] [2] [3] so maybe it’ll be a toss up whether a street has a name already.

When you’re there, you could add quite a few street names

Thanks for the feedback and advice. I’ll be there for about two weeks, meeting up with some family on a holiday. I’d love to spend some more time getting out and mapping things, but will see what I can do in the times I manage to get out for a run!

And you’re also right in that street names are relatively new, and are rolling out slowly. It could be some time before this information is formalised and able to be locked in for OSM anyway, given a lot of the ‘existing’ street names were to be reviewed as part of the naming process.

It may very well be a case of just running what I can, snapping some images in the process and adding what I can when I get back. At least having run where I can, I’ll be ready for when OSM is able to catch up.

Another tip: check their governmental website(s) and see if there are planning maps available, this data is allowed to be used as a reference for updating street names and drawing streets in OSM, and is usually quite accurate as long as it isn’t too old. I use these a lot in Portugal but even city to city their quality and ease of accessibility is variable…let alone country to country!